As it was my birthday the other day, I decided to celebrate it by going to a Nigerian Restaurant. I haven't actually been back to a Nigerian place since 2014, so it was nice looking forward to exploring that avenue again.
Loads of ideas were flown around, but in the end we settled on this place Banana in Tottenham,

So I had Jollof Rice with plantain, meat and stew. Which tasted great actually. My mate had fried yam, with Stew. Her Mum had vegetable soup with pounded yam. In Igbo (The language that some residents speak in Nigeria) the soup is pronounced as Edikang Ikong Soup.
It was quite funny actually because France was playing Iceland in the Euro 2016, so everyone in the restaurant was watching that, and not really paying attention to anything else really.
Speaking of the Euro's i do hope Wales make it to the final, how good would that be for the British? England needs to take note really...

This is the link to the Banana restaurant,

This is a picture of the Jollof Rice Recipe I was discussing earlier. So Jollof Rice is great as it is packed full of carbohydrates, which we need for energy. The red stew is full of tomatoes which we need as part of the five portions of fruit and vegetables daily. This meal would be classified as having 1 portion, however the handful of plantains would be classified as having another portion as well, because it is a vegetable. So overall a healthy dish. 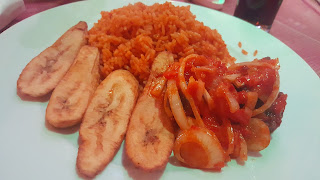 This is the Edikang Ikong Soup, I was also discussing. This tasted gorgeous when I had a little bit of it. It is full of vegetables in this, so this would easily have at least 3 portions of the recommended five a day in there. This is fantastic for vegetarians/vegans as well because you can easily remove the meat out, and just have the soup on its own with the pounded yam. 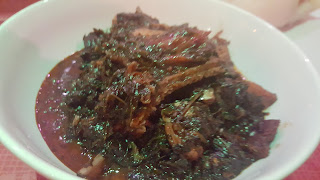