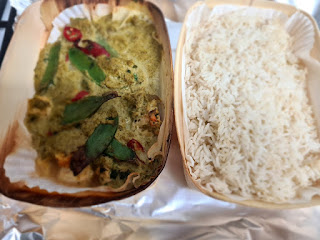 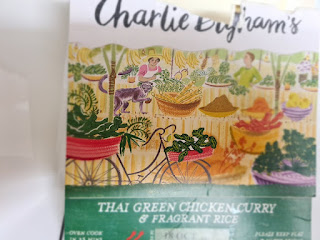 Today was the second day of lockdown, (number 2 by the way ha) which was not a great day, for various reasons which is far too long to mention, but anyways, I thought I would treat myself to a takeaway. This one is from a company called Charlie Bingham. I have tried their other meals, which are on my previous blogs, including the tikka masala, and lasagne, which were both delicious. I came across this one in the aisle and I was pretty sure it was going to taste just as nice, I thought I would give this a try, especially as it was a disastrous day. It was priced at £4.00 in the clearance, (usually it is around £8) and it is the Thai green chicken curry flavour, served with rice. It is quite healthy, as it is packed full of vegetables, and spices, including less salt and sugar.
It takes half an hour to cook in the oven, everything is well equipped, which I love. So all I had to do once the packet is opened is to pop this in the oven.
Halfway through cooking I could smell the strong curry smell piping from the oven, which made me even more excited, and the food had still not been cooked through yet.
Believe me when I tasted this, it was beautiful. The chicken was moist and soft, there was a lot of spices, and flavours from the curry. I felt like I was in an Indian restaurant. This is highly recommended, and would definitely try the other products. So another review from Charlie Bingham would be coming shortly, so watch this space....