So from the title of the above heading you might be wondering what this is all about right?

Ok so here goes, so I was at the gym. ( I try and go three times a week) and they had introduced this new machine where you can record your BMI which stands for Body Mass Index. It tells you if you are overweight or a healthy weight based on your height and weight.
So you can see in the picture that I have attached that based on my weight and height, I am half a stone on the overweight side. So I was kind of disappointed but then I realised actually I have dropped a dress size recently, I know that waist size has also dropped. Based on this I realised that I cannot be overweight well I am but I have gained muscle which would increase on the weight scales, as muscle weighs more than fat. However muscle is more defined and sculpted in comparison to fat, which is more spacious and blobby.
don't get me wrong BMI is a great way to monitor health and weight loss, however there are other ways to find out progress:

Waist circumference, grabbing a tape measure, and measuring the fat around the abdomen. So for men this should be below 37 inches, and for women it should be no more than 32 inches. This I think is one of the easiest ways to measure progress. Measure the waist at the beginning of your health journey, and then measure the waist again three months later to see if there was any reduction

Body fat, this is done by using calipers and recording the body fat in the triceps, stomach, and the thigh. Again this is recorded at the beginning of the health journey, and then three months later to see if there were any reductions.

There are others including hydrostatic weighing, but that one I think is not as effective, as it involves many processes which can increase the chances of various problems.

Overall if like me you have been told that you are overweight, try and record other measurements as well as the waist and the calipers,  and then re record this three months later to monitor progress.
The main  s 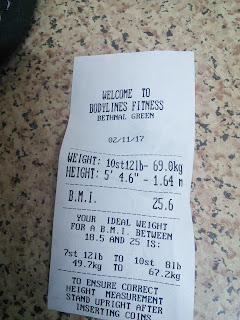 ummary to take away from this is that at least you are acknowledging your health and doing something about it.