One of the ways of adopting healthy eating and lifestyle is at the supermarkets, or the local store, as it is very important to be aware of food labels. Looking at labels is a gateway into what is in them, and to check the amount of fat especially saturated fat, salt and sugar. These are the most important nutrients that are needed to be looked at.

Excess fat can lead to weight gain, as well as this it can also lead to an increased chance of having obesity related diseases, including coronary heart disease, high cholesterol and blood pressure.

Excess salt can lead to increased blood pressure which can likely develop into heart disease, or a stroke. Sometimes blood pressure is called the silent killer because there are no symptoms of having it, so unless this is checked, we would not know if we had it or not.

Overall it is particularly important to choose foods that have natural sugars in them, for example, lactose found in milk or fructose found in fruit, and to try and minimise the refined sugars. These can be found in biscuits, chocolate, fizzy drinks and alcohol.

People assume that calories should be looked at as well, this is correct to a certain extent. As long as the calorie consumed does not exceed the calories burnt during exercise, weight gain should not be expected. This is why in my previous article (the importance of walking) I explained why exercise is very important, one of the reasons being losing weight.


In the UK supermarkets there are two types of food labels. Both of them are a great way of demonstrating if the product is high in sugar, salt and fat. One of them is called the Guideline Daily Amounts, and the other one is called the Traffic Lights Labelling system.

The Guideline Daily Amounts (GDA) is used in supermarkets like Tesco, Morrisons and Somerfield, It was set up by the Food and Drink Federation in 2005. The team are experts from the food chain, scientific experts, and the Industry Grocery Distribution (IGD) the aim of this was to produce a consistent front and back of pack GDA system. When the values were released supermarkets showed the value for calories, sugars, fat, saturated fat, and salt.

The labels are displayed in percentages; this is so that the consumer can see how much of that nutrient the person has left for the rest of the day. For example an item that contains 600 calories and 2 grams of salt, the GDA label would show that the item contains 30% of the recommended GDA for the day, for calories for a woman (for a man this would be 24%) the salt value it would state that the product contains 33% of the salt content for that day. Therefore the person has 66% left of salt to reach that maximum for the day. The food products label shows percentages of sugar, salt, fat, saturated fat, and calories. The scheme has proved to be very successful as according to the GDA label website, there are in total 95 companies that have adopted the scheme, including food chains, and manufacturers. The scheme has gone international as well as the Food Company Kelloggs have launched the GDA in South Africa, and in Australia, where this is promoted by the Australian Food and Grocery Council.

The other system is called the traffic light labelling system, which is adopted in supermarkets including Sainsburys, Marks And Spencer, and Waitrose. This was produced by the Foods Standards Agency (FSA) and the Scientific Advisory Committee on Nutrition (SACN) The system labels items in the form of traffic lights. Red meaning high in that nutrient, amber meaning the value has a medium amount, in that nutrient. Green meaning that the nutrient contains a low value in that nutrient. The system is very different to the GDA labels in that there are no percentages involved in the traffic lights system. Also all items are labelled either in red, amber and green. The aim is to choose items either with green or amber lights rather than reds, as they are considered healthier
This is reassuring to the consumer if they would like to choose healthier options.

Overall both systems are a great way of influencing healthy eating and choosing healthy options, which will hopefully reduce the obesity epidemic in the UK. However UK health ministers would like a uniform front of pack food labelling system across all food products. There is currently a consultation into how this can be done. 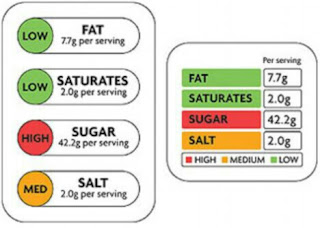