Constant use of fluids

I decided to write this post because the amount of bottles of water I have  consumed over the last week has amounted to 12  litres of water. That is equivalent to 44 cups of water. But then over the last week I assume that the amount of fluids that I have lost during the heatwave is the reason for that, including sweating (bucket loads) , urinating, exercise ( well for me that was walking, and it was not that far so I can pass on that)
Thinking about it I really do appreciate the importance of drinking water, not only for the health benefits but it does help to replenish the fluids that is lost.
As the heatwave is slightly reducing, and the temperatures are dropping down to a more sensible level, I do feel a sense of relief because I really was struggling to sleep at night, also in the morning I would wake up and become irritable,which is not me at all. Then I start snapping at everyone, again something that is not me at all
I am going to use the drop in temperature to really catch up on the lack of sleep, that's the heatwave to blame!! 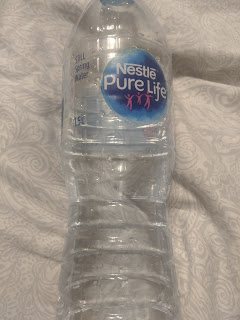