I made enchiladas yesterday, after watching masterchef. Masterchef is a great show, showcasing talented chef's their cooking skills. I have always enjoyed cooking, but sometimes i have to feel in the mood to do it. So after watching it i was inspired to go back into the kitchen again. I already had some of the spices, i really just needed chicken, wholemeal wraps, and spinach. I bought all three items in Lidl, and it  costed me no less than £5.

In total it took 45 minutes to make including oven time. The whole meal itself is really healthy, in particular the spinach which is really high in vitamin A  (great for eyes, seeing in the dark,) i have added in other vegetables, including sweetcorn, which contains vitamin b, and C, and it also is high in Potassium and magnesium. Kidney beans which contains folate, iron, copper. i swapped the wraps for the wholemeal version to try to have an increased higher amount of fibre in them,

I added in extra spices to give the meal a bit of a kick, including cumin, basil, and a cube of vegetable stock.

There was enough to have the meal for three days. If i chose to , i could have frozen these as well. 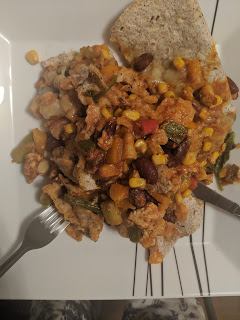 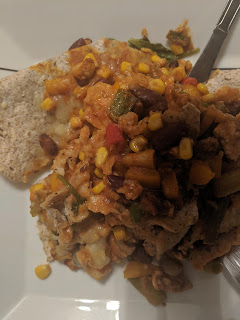